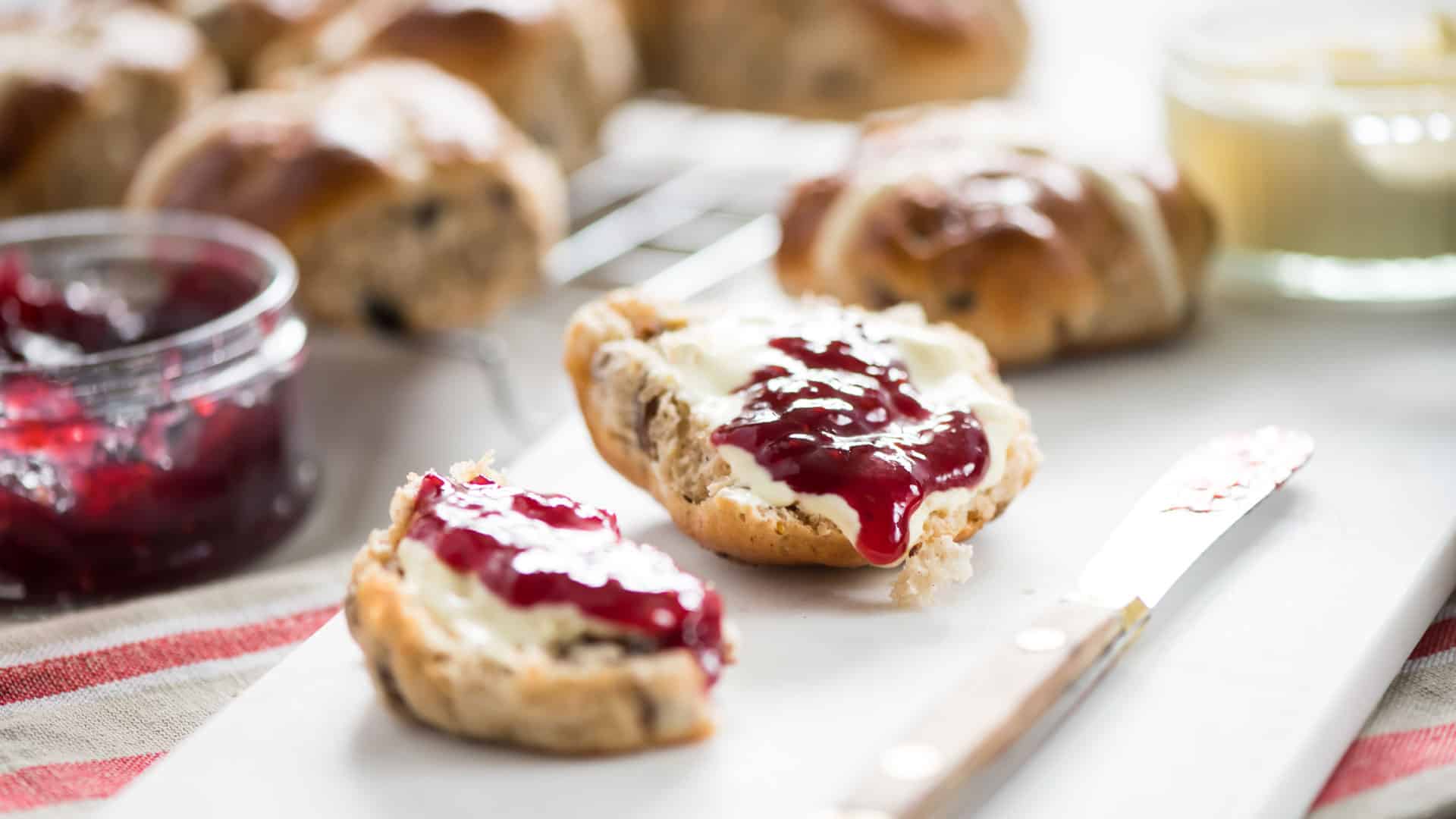 What is National Cream Tea Day?

National Cream Tea Day is an annual celebration on the last Friday in June of this quintessential British light afternoon meal. This year it will be Friday, 25 June 2021. Organised by the Cream Tea Society it encourages participants to raise funds for a charity of their choice. Since the campaign began it has raised over £500,000 across the UK.

However, like a number of days in this online compendium of wisdom, it is less of an awareness campaign (who doesn’t know and love a cream tea? Errr, yeah?) and more of a celebration of all things cream, jam, scone and tea!

Setup in 2015 by Rodda’s clotted cream and Tiptree jams the Society offers marketing material, invitations, bunting and advice on how to get started and promote the day. Each year it pledges 50,000 portions of clotted cream and jam to organisations nationwide to help raise money and make cream tea celebrations truly delicious.

Note: despite cream teas traditionally being taken in the afternoon, it is not to be confused with the broader light afternoon meal we call Afternoon Tea – another highly celebrated British affair.

Furthermore, other publications state that cakes, sandwiches and biscuits are a component of the cream tea. This is not true (and probably wasn’t written by someone who’s never had one, but it’s a bit of a giveaway when the clue is in the name: it’s a ‘cream’ tea). While afternoon tea may include these foods, a true, traditional cream tea does not.

A History of Cream Teas

Tea was introduced to the UK in the 17th century by the East India Company but its popularity grew when Catherine de Braganza (daughter of Portuguese King John IV) married Charles II in 1662 and brought the ritual of drinking tea to the English Royal Court.

In 1706, Thomas Twining opened London’s first tearoom and before long a flurry of tearooms appeared across the city, a far sight more inviting for a lady than the male-oriented coffee houses.

When and where the cream tea originated though is not cast in stone. Local historians in Tavistock, Devon, believe putting cream and jam on bread began as far back as the 11th century after studying ancient manuscripts leading up to the 900th anniversary of the granting of Tavistock’s Royal Charter by King Henry I in 1105. After marauding Vikings had plundered the Benedictine Abbey in 997AD the monks rewarded local workers for its reconstruction with bread, clotted cream and strawberry preserves.

Moving a few years on, the scone was also very much part of the Duchess of Bedford’s fayre for her afternoon tea which became a popular society event from the mid-19th century.

But it was the tourism boom in the 1850s sparked by the opening of the railway that really saw its popularity rise. Visitors bustled south looking to relax and indulge, and hotels, tearooms, farmhouses and cafés were happy to oblige offering delicious afternoon cream teas, made with the finest local ingredients. The jam was invariably strawberry. And the cream was always clotted.

What is a Cream Tea?

Originating from the Westcountry (the Southwest of the UK), a traditional cream tea is a light refreshment taken in the late afternoon consisting of four essential components: clotted cream, scones, fruit jam and a pot of tea (droooool).

Traditionally a speciality of Devon and Cornwall it has since spread across the breadth and depth of the UK to become a national treasure.

Note: scones can be eaten at any time and are often eaten with butter – they are not only to be eaten with a cream tea. However, in the context of a cream tea butter is not used. You don’t butter your scone, then add jam and cream. It’s just not done that way.

Cream is a cornerstone of the meal: not the runny sort you put in coffee, nor the whipped sort you add to strawberries or waffles, but clotted cream.

But what is clotted cream?

Clotted cream is made by indirectly heating full-fat unpasteurised cow’s milk using steam or a water bath and then leaving it in shallow pans to cool slowly. During this time, the cream content rises to the surface and forms “clots”.

In fact, to protect its authenticity Cornish clotted cream was granted Protected Designation of Origin (PDO) by the EU in 1998 and is now enshrined in law: in order to be called authentic it needs to contain 55% butterfat and must be made from milk produced in Cornwall. The unique, slightly yellow, Cornish clotted cream colour is due to the high carotene levels in the grass.

We’ll come on to the debate about “scon” or “scone” later (see below) but a scone is a bread baked on a griddle or sheet. It is small, circular, in the same group as the crumpet or muffin and made of wheat, barley, or oatmeal and baking powder to make it rise. Some scones may contain raisins, currants, cheese, or dates, and it is generally thought that scones are best eaten when they are warm and freshly baked right from the oven.

In fact, so popular is the scone it sits top of a YouGov survey on best British foods in the sweet category.

Strawberry jam is typically the preserve of choice but cream tea rebels may use any type of jam. It doesn’t really matter as long as you enjoy it.

There are so many teas in the UK, choosing a single one would be the subject of a long debate.

While in practice you can have any tea you like, fruit teas are rarely the choice but if you want to go for a caffeine free drink then chamomile may be the option or you may like to imbibe in a herbal tea.

Rodda’s, the clotted cream guys, recommend brewing “ideally loose-leaf tea in an ornate silver pot” while The Spruce Eats has a good rundown of the top 10 afternoon teas some of which pair well with cream teas and scones.

Personally, I prefer Earl Grey tea (I drink it as a treat in itself rather than builder’s normal English breakfast tea, but coupled with a cream tea I get a double whammy – I’m the winner):

How Do You Pronounce Scone? The Eternal Debate

Whether you say “scone” as in bone, or “scon” as in gone, is entirely up to you but the basis of the meal is definitely the scone (I suppose you could just eat the jam and cream but you may feel rather sick).

Let me start with a little ditty from a 1913 copy of Punch to illustrate:

The Cambridge English Dictionary says “scon” as in gone, but definitive research has in fact again been conducted by YouGov that might actually lay this debate to rest.

According to the research 51% of Brits pronounce it to rhyme with “gone” with around four in ten (42%) rhyming it with “bone.” Region and social status are key to understanding this. Those living in the North (60%) and Scotland (80%) overwhelmingly use the “gone” pronunciation, while those in the Midlands (56%) and London (50%) are much more likely to go with the “bone” option.

It continues: Those in the C2DE social grade are evenly split, with 45% going with the “bone” pronunciation and 46% going with “gone”. However, among ABC1s there is a very real split. The middle classes are far more likely to go with the “gone” option (55%) than “bone (“40%).

The Devon or Cornwall Way?

Another debate that still torments even the greatest of minds is whether to eat your cream tea the Devon or Cornwall way. Which one are you?

I must say, I’m a Cornish fan. The jam being sticky it adheres to both the scone below and cream on top. Applying the cream first then the jam becomes an unholy mess as the cream, being not sticky, squishes and slides off the scone. Believe me. I’ve had oodles and oodles of cream teas, I’m a huge fan and have made all the schoolboy errors.

However, I’ll let Her Majesty have her say. According to one of her former employees, Darren McGrady, the Queen prefers jam first, then clotted cream.

To put the matter to rest though YouGov continued its investigation: jam first – also known as the “Cornish” method – is the overwhelming favourite, with more than six in ten (61%) preferring this method. By contrast, just one in five (21%) go for the “Devon” approach of putting the cream on before putting on the jam.

The cream tea – and afternoon tea in general – comes with an etiquette (unbeknown to my nephews, afternoon tea is not a race nor a challenge to see how many scones you can eat in one sitting).

A proper teapot, either silver or china is required and a second pot of hot water should be available to dilute and top up.

There are differences of opinion though on who should pour the tea. Many suggest the person sitting closest to the tea pot should pour for everyone but I rather like Twinings’ description of tea etiquette:

“It’s customary for the person doing the hosting to pour the tea out, and for the teapot to be left on the table with the spout facing the person who poured.

If sat at a table, the proper manner to drink tea is to raise the tea cup, leaving the saucer on the table, and to place the cup back on the saucer between sips. It’s considered rude to look anywhere but into the cup whilst sipping tea, and absolutely no slurping!

A few more absolute no-no’s are; unfortunately, is it inappropriate to dunk one’s biscuits in tea! (of course, this only applies when in polite company!), and also, no using tea to wash down your food!

Then there’s the question of whether it’s milk before the tea or tea before the milk?

To quote Rodda’s again, “The tea should be poured in first, followed by milk and sugar”. This is a more modern approach. Traditionally, milk was poured into the china tea cup to cool it down prior to adding boiling water to prevent it cracking under the sudden intense heat. With tougher porcelain today this is no longer necessary.

Twining’s continue with their etiquette:

“Under no circumstances must you stir tea in a circular motion! The ‘proper’ way to stir is to place the spoon at a 12 o’clock position in the cup and softly fold the liquid back and forth 2-3 times to the 6 o’clock position, and never ever leave the tea spoon in the cup. When your tea spoon isn’t being used, pop it back on the saucer, to the right of the cup.”

Oh, and do not stretch out your pinkie. That’s just not done.