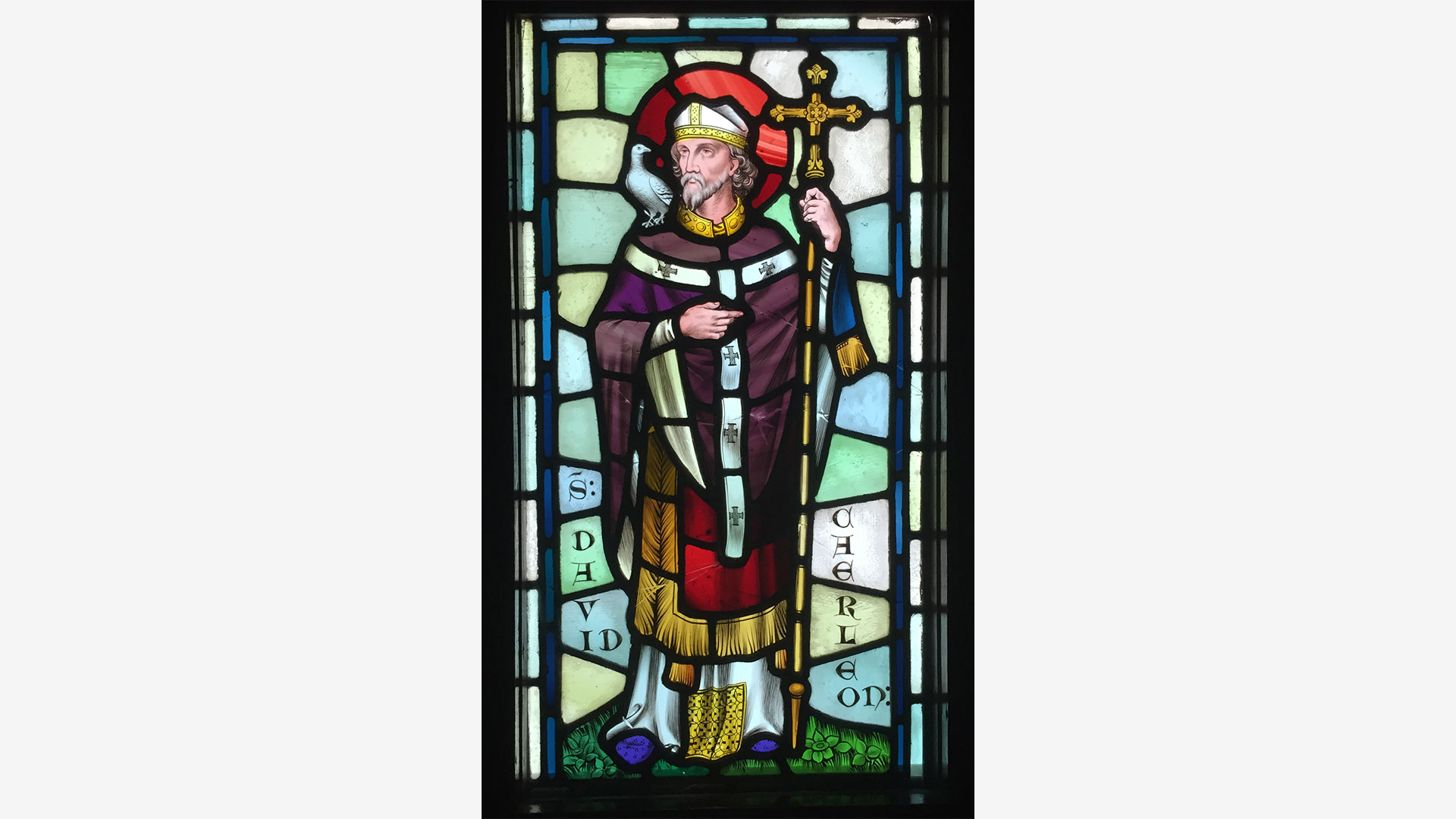 Who Was St. David?

Born in the 6th century AD, St. David was a Bishop of Mynyw in Wales, now known as St. David’s. He is the only native patron saint in the UK.

St. David’s Day is March 1st which marks the (assumed) date of his death.

Tradition says that he was born in Henfynyw, Ceredigion, modern day Cardiganshire, South Wales. Despite him being a locally born saint his exact date of birth is unsure with dates ranging between 462 to 512 AD. Ceredigion was a minor Kingdom in those times, ruled by its own king or chieftain and St. David is reputed to be the grandson of King Ceredig ap Cunedda.

His supposed father, Sant, is said to have raped Non, the daughter of a nun and a chieftain, who was probably a nun herself. Non allegedly gave birth alone in the midst of a storm on a Pembrokeshire cliff top. During her labour she gripped a rock so hard that her fingers left imprints in the stone. The spot is marked by a chapel (now in ruins) named after Non who was herself sanctified.

A nearby well, which reportedly sprang up as St. David was born is reputed to have healing powers. The site of St. Non’s chapel, St. David’s birthplace, is surrounded by a bronze age stone circle, so it would seem to have been regarded as a place of power, a sacred place, for millennia before Christianity.

As St. David was born at a time and in an era where history was passed on orally rather than by the written word, it’s not surprising there are few hard facts about his early life.

Is it fair to assume his mother introduced him to Christianity? Probably, and he certainly became known throughout the Celtic lands as a preacher. Legend has it that he was extraordinarily tall for the time, over 6ft, and a powerfully persuasive speaker. Given that he travelled extensively around the Celtic nations of Wales, Ireland, Cornwall, Brittany, and the Scottish Isles, it would seem likely he spoke several languages.

St. David founded monastic settlements and churches all across the Celtic lands, and modern day St. David’s Cathedral stands on the site of the monastery he founded in the Glyn Rhosyn valley.

At some point around 550 AD he spoke out so eloquently against the believe in Pelagianism (a theological idea that original sin did not taint human nature) that he was elected archbishop of the region by his fellow monks.

Unlike the grand monastic buildings of later centuries, the monastery founded by St. David would have been on a much smaller scale. Rather than a stone built abbey, there were probably a series of huts built in the Celtic tradition.

Also, in complete contrast to the excesses of the lives of the local chieftains and rulers, and later monasteries, St. David promoted and practiced asceticism. He drank only water and ate only bread and vegetables (at the single meal of the day) and he expected his fellow monks to do the same. No animals were used to plough the land they cultivated, instead the monks were compelled to pull the ploughs themselves.

Several miracles are ascribed to St. David, the best known probably being that when preaching in Llanddewi Brefi he realised people at the back couldn’t see him, and so he caused a small hill to form beneath him to raise him up. As he did so a white dove sent from God settled on his shoulder.

Another lovely legend attached to St. David concerns bees. A monk from Ireland, Modomnoc, became beekeeper at the monastery founded by St. David. When the time came for him to return home to Ireland the bees reportedly kept following him to the boat. He tried three times to head to the coast and each time the bees would tag along. Modomnoc kept returning to the monastery and the bees would head back to their hives. Eventually St. David blessed the bees and allowed them to leave with Modomnoc, thus introducing bees to Ireland … or so the story goes.

He was also reputed to be a great healer and healing wells are alleged to have sprung up in many areas following a visit or the performance of a miracle.

The date of his death is as uncertain as that of his birth. Tradition marks it as being 1st March, but the year is uncertain, the two most commonly ascribed being 589 and 601. If you take the assumed years of his birth that could make him anywhere between 77 and 139 years old when he died. His life of asceticism obviously kept him healthy!

St. David’s earthly remains were enshrined in the monastery he had created, and although the original shrine burned down in 645 and suffered repeated raids by Vikings, it was always rebuilt.  The shrine dating from the medieval period has now been fully restored and resides in St. David’s Cathedral – the church built on the site of the original monastery.

When Was St. David Made a Saint?

His shrine became a centre of worship for his many followers, and he became a symbol for all of Wales. His simple way of life serves to remind people what is important in the world. But it wasn’t until 1120 that David was officially recognised at the Holy See by Pope Callixtus II. He was also canonized by the Eastern Orthodox faith.

Is St. David’s Day a Bank (Public) Holiday in Wales?

No, it isn’t although there are calls for it to become one.

On St. David’s Day itself, the people of Wales (and indeed people of Welsh descent across the globe) wear a daffodil, the national flower of Wales, or a leek – St. David’s personal symbol. Vegetarians have adopted him as a patron saint given his insistence on a meat free life at the monastery he founded.