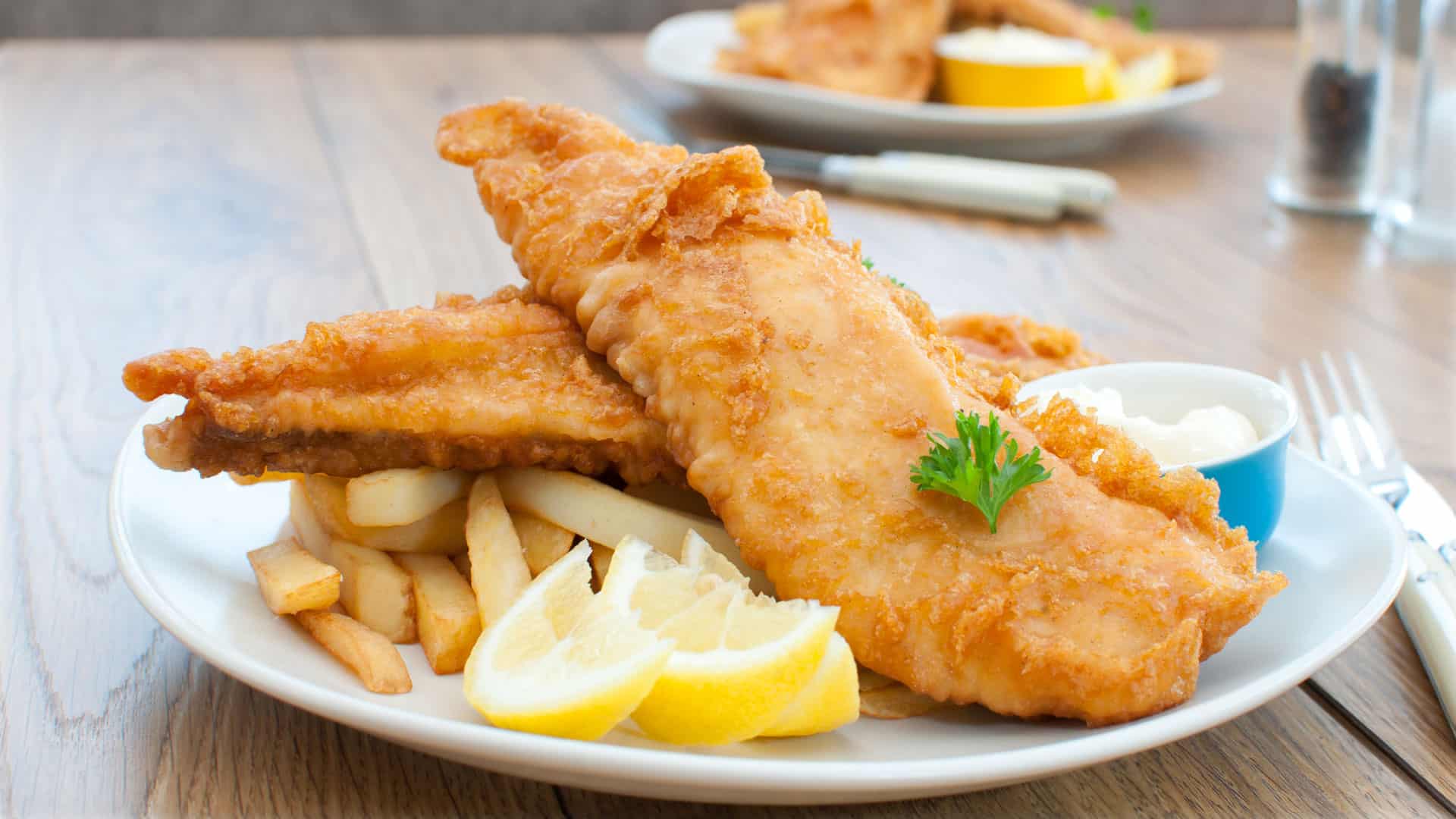 What is National Fish & Chip Day?

National Fish & Chip Day is an annual awareness day in the UK on the first Friday of June that celebrates this great traditional British dish, those who fish our seas and are involved in its production.

Since 1996 it has brought thousands of people out to celebrate one of our favourite national dishes: fish and chips.

Promoted by NEODA (the National Edible Oil Distributors Association) it encourages everyone from the bar, pub, restaurant and takeaway trade – anyone selling the glorious food – to fishermen and farmers who provide the sustainable and natural ingredients needed to create this family favourite, to get involved.

To this end NEODA sells t-shirts, produces flyers and logos, and runs social media activity to promote the day.

A Brief History of Fish and Chips

Fish and chips is a typically traditional meal consisting of fish fried in batter, and fried chips. It is officially Britain’s original fast food.

Sources have it that fried fish is an introduction by Jewish immigrants from Spain and Portugal in the 17th century while the humble potato is an introduction to UK by Sir Walter Raleigh in 1586 after his trials and travails in the West.

There is some debate as to when and where ye olde fish and chip shoppe began though. Some say it was in Mossley, Oldham, in 1863 with its owner, John Lees, claiming it “This is the first fish and chip shop in the world”; others say it was Joseph Malin in London in 1860 on Cleveland Street.

Whatever its origin fish and chip shops subsequently developed into small, family run businesses. Their number gathered pace during the industrial revolution and with the creation of North Sea commercial fishing and the development of railways fish from as far away as Iceland, Greenland and the North Atlantic could be brought to the burgeoning market towns.

Cheap and filling, it henceforth became a regular Friday meal and a payday treat.

Fish and chips played an important national role as well when the Territorial Army prepared for battle. Fish and chips were provided in special catering tents erected at training camps in the 1930s and, incredibly, was not rationed during the Second world war.

How Popular is Fish and Chips in the UK?

Fish and chips has been, and still is, a hugely popular dish in the UK but does it remain at the top spot as it has for decades? Where does it rank among the greatest of British foods?

According to a 2019 poll fish and chips was still the most popular dish in the UK with at least one in five Brits visiting the local chippy once a week, with another third having it once a month.

“The tradition of “Fish Friday” is also going strong as more than a third said they would most likely stop in at the chip shop to signal the start of the weekend.”

A 2019 report by the Daily Mail however, citing a Channel 5 documentary, found Chinese food to be the most popular, followed by Indian, then fish and chips. Fourth in the queue was pizza, and fifth was the burger. Here is the full list:

In a national YouGov survey of 50 classic British foods however, our famous fried friend came out on top in the savoury category.

Facts, Figures and Statistics about Fish and Chips

There are now approximately 10,500 specialist fish and chip shops in the UK grossing a whopping £1.2 billion in turnover per year and employing around 61,000 people (though this was estimated at 75,000 in 2015 by another source).

Cod is the most popular fish followed by haddock.

(By comparison the number of McDonalds restaurants in the UK runs at around 1,300 and employs around 120,000 people.)

The seaside emerged as the nation’s favourite location for enjoying fish and chips (31%), followed by at home on the sofa; and men eat fish and chips more often than women, with 41% consuming the meal at least once a month, compared with 30% of women.

In a BBC Newsround poll, people were given choices of preferences of their favourite components of a fish and chip meal. The poll seems to be still open. At time of writing, results are:

This was largely corroborated in the Independent:

“As for the ultimate fish supper, battered fish with chips, salt, vinegar and ketchup was voted as the quintessential chip shop combination.

(I’m not sure about you but whenever I go into the chippy they always serve such vast portions of chips. It’s not that I’m complaining, but even a small portion is enough to feed a whole family. I’d hate to think what a large portion looks like.)

Best Fish and Chips Restaurants and Takeaways in the UK

Rather than me rattling off a few of my favourite chippies I’ll let the various awards and gastronomes tell us.

The BBC Good Food Guide however has other ideas: